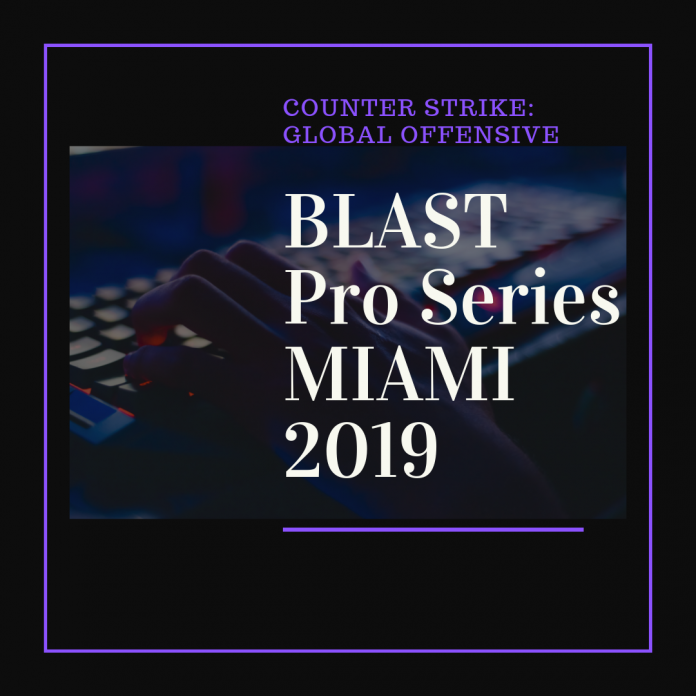 The BLAST Pro Series made a second presentation in 2019 on the east coast at Miami, Florida. Six of the best teams in the world participated (Selected by invitation of the organizing committee) to compete for a prize of USD $ 250,000.

On April 12th & 13th  of 2019, the Watsco Center of the University of Miami was lit up with the highest level gamers of CS:GO. The invited teams were: Cloud9 and Team Liquid from USA, FaZe Clan, Astralis, and Natus Vincere (NaVi) from Europe, and MIBR from Brazil.

The format was the same that has been implemented in all the BLAST Pro Series played until now. In the first round, the six participants play a round robin in the BO1 mode, then the first two classified (The top two winning teams) teams advance to the grand final.

The grand final is played on the best of three maps (BO3) and the champion receives the award of USD $ 125,000. The second place wins a prize of USD $ 50,000, and the third place wins USD $ 25,000. The team finishing third can choose opposing team to face off in the Pro Standoff. It is an exhibition match that is played on a custom map called BLAST Standoff where 5 players of each team face opponents one-on-one with pre-established weapons. The duel is won by the first to reach 7 rounds, while the game is won by the team that has most kills, taking a total of USD $ 20,000 extras.

The tournament began with the duel between NaVi vs MIBR in Nuke, which started with advantage of MIBR after an excellent defense in the first two rounds, but when the “buy round” came for NaVi, the versatility and the methodical game of the NaVi players began to do damage to the MIBR defense,  controlling half the map. NaVi’s  “s1mple” and “electronic” duo star power dominated the game with the map ending with 16-6 leading to the victory for team NaVi.

In another round, the game between Cloud9 vs Astralis was kicked off, Astralis took the victory with a slightly adjusted score of 16-10. The first round of games ended with Team Liquid winning the duel with FaZe Clan with a score of 16-5. Here are the details of the remaining 4 rounds with all scores:

After finishing the round robin, the teams finished with the following results:

The grand final was played between Team Liquid vs FaZe Clan.

FaZe Clan were solid in both strategies of attack as well as defense in the first map (Mirage). The final score was 16-6 with victory for FaZe Clan.

The second map (Dust2) followed the same pattern as Mirage. “NiKo” and “rain” did everything possible to take the second map, and forced the third map. FaZe Clan achieved their first championship this 2019 with a score of 16-12. In addition, “rain” managed to establish a world record during Dust2 where he scored 21-0 with two Aces in round 8 of the map.

Here are the stats of tournament MVP Nikola “NiKo” Kovac and grand final.