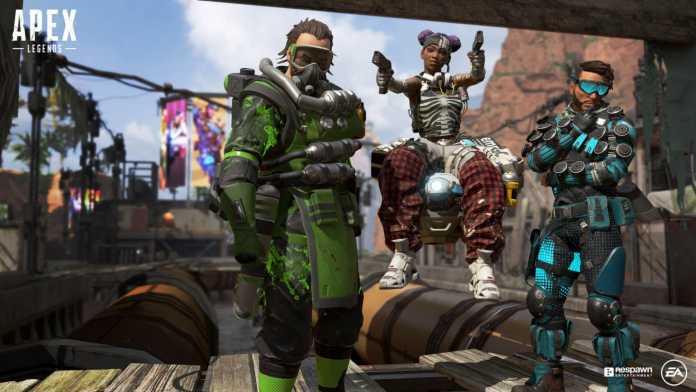 Apex Legends is one of the most popular games currently in the gaming world. What makes it quite interesting is that it brings in a very good performance and creative gameplay, something that the battle royale genre is missing at this time. On top of that, it combines the hero-based gameplay of Overwatch with the world of Titanfall and the creativity of Fortnite while also blending some nice things of its own in there as well.

Apex Legends adds new characters all the time, but the primary idea is that they are either focused on healing, boosting speed, defense or attack. Each one of the characters such as Lifeline, Pathfinder, Caustic, Mirage or Octane have a passive ability, an ability you need to activate and an ultimate ability too. All of these are very distinctive, so you can play with every character and master their abilities.

When it comes to map design, we find it to be rather interesting. You have a desertic area, multiple military bases, chasms and a barren wasteland location. So there’s plenty of variety here, with more being on the way based on what was shared by the creators.

The core idea is that you play in a group of 3. So teamwork is essential, which immediately makes Apex Legends better than many other games in the genre. At the same time, you also need to try and stay alive, as the circle is closing every few minutes, thankfully you will have an announcer that will immediately let you know when that happens.

Apex Legends allows you to respawn your friends in the team and it also has a great ping system. This way you don’t have to worry about not having a mic, you can still interact with your team and let them know where the enemies are, if you found loot and so on. There are special drops in the game, and you will also have a ship roaming around the map and which does have special items in it too. The game encourages you to move all the time, and that clearly brings in some fun moments for the entire process and experience.

There are plenty of guns here, such as rifles, pistols, machine guns and so on. What makes Apex Legends great is the fact that everything feels very natural, the gun play is satisfying and you can also upgrade your weapon with attachments found along the way.

Graphics look amazing in this game, and everything is very polished. The map design is great and the fact that characters look extraordinary is also a plus. The gun sounds are impressive and you can listen to the game sounds to see if enemies are nearby. You don’t have a soundtrack though, aside from the drop music in the beginning.

Which is the best battle royale?

That’s hard to say. Apex Legends does a very good job at offering a creative blend of hero shooter and battle royale, and the game on its own is very polished. Fortnite goes with the more cartoony aspect, but it still plays very well as a whole. And PUBG brings in more realism, but it does have bugs and it’s not as polished as the other two. So in the end it all comes down to what type of game you like, but you can rest assured that there’s one you will enjoy quite a bit in the end!